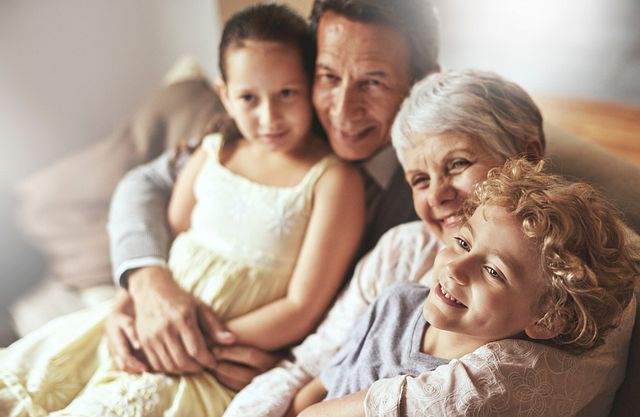 Let me turn now to the people who are most likely to give you the help you need. I'm referring to maternal or paternal grandparents. They have a God-given responsibility to influence their grandkids, and most of them are more than willing to fit the bill. Our organization just published a helpful book that may stimulate some ideas. It is called The Gift of Grandparenting, by Eric Wiggen. Here are some excerpts from it that will, I hope, not only motivate single parents to look to their parents but will inspire grandparents to get more involved with grandkids. These are the considered words of Eric Wiggen:

Young people who visit their grandparents, with few exceptions, do so because they want—often very badly—the companionship of their elders. The same grandmother who beat me at checkers when I was nine became a friend in whom I could confide when Iwas 19. She wrote me letters, long and full of family news. WhenI came home from college, we talked. And you know what? Grandma wanted to listen to me! I soon found that she was fascinated with what I had to say, and she had more time tolisten to me than my parents. For your teen or single young-adult grandchildren, perhaps the most important "entertainment" you can give them is to listen when they talk.

A sage once remarked that the elderly slow down and stoop over so that they can see things as children once again, so that they can hold the hands of children who toddle along on inexperienced feet. That bug on the sidewalk, the snail under the cabbage leaf, the robin pulling the worm from the rain-moistened earth—these are the things small children and their grandparents notice.

Our grandchildren live in imperfect homes, reared by imperfect parents: our sons and daughters who are married to our sons-in-law or daughters-in-law, all of them imperfect. Although we all made mistakes raising our children, the good news is that as godly grandparents, walking with the Lord, we can expect the Lord to use us. Because of our own immaturity when our children—now parents—were growing up, we may have disappointed them. Butby keeping us alive to enjoy our grandchildren, the Lord is giving us a ministry to help fill in these gaps in our imperfect child-rearing.

We grandparents must first firmly retake the lead, if not of society as a whole, at least of our own families. This is not as drastic a step as it may seem, for the pendulum has begun to swing the other way, and maturity is coming into fashion again.

As grandparents, we desire to help usher our Brandons and Meghans across the threshold of adulthood. We can best do this when we realize that these youth, who much of the time are carefree and happy, are also suffering through the most trying years of life—from puberty to young maturity. We gently criticize their behavior when we must. We set guidelines and expressions when they're entrusted to our care. Even as we wouldn't question another adult's toupée or hairdo, we avoid personal remarks about our emerging adult-teens whose souls may have been torn and trampled already inthe school gauntlet or by conflicts at home. But most of all, we support, we listen, we pray. And we love.

Grandparents today are not only needed in a supportive role to their daughters and sons, a surprising number of them have been given full custody of their grandchildren. They raised their children many years ago and thought their parenting job was done. Then when they should have been simply supplementary to the main event, they are faced with one of two very difficult choices: either accept the responsibility of raising another generation of kids, or watch them suffer from inadequate care or placement in a foster home. This is not the way families were designed to function. It represents another aspect of marital disintegration and children born out of wedlock. I would need another book, or many of them, to address that concern in depth, but it is one that deserves our prayers and creative thought.