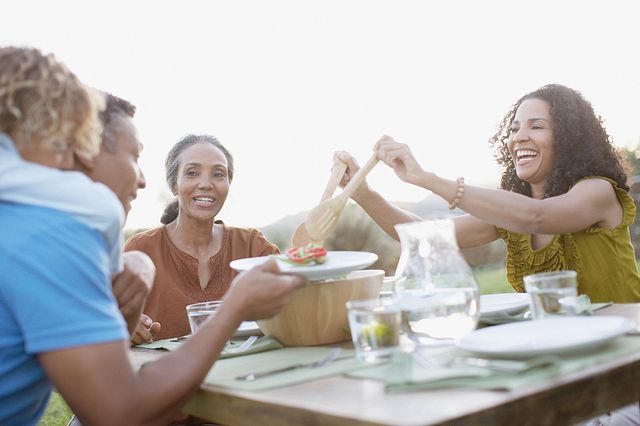 I can't conclude this discussion without speaking directly, and perhaps boldly, to Christians who live in intact families. You have been reading in this chapter about the challenges faced by single parents. I hope you will consider the ways you might help. Men, how about taking the sons of single mothers with your own boys when you're going fishing or out to a ball game? Let those fatherless boys know that you care for them. Answer their questions and teach them how to throw a ball or how to block and tackle. This is not simply my own casual suggestion. It is a divine commandment. Remember the Scriptures I shared about God's compassion for fatherless children? Jesus conveyed that same love to the young. He took boys and girls on His lap and said, "Whoever welcomes a little child ... in my name welcomes me" (Matthew 18:5).

To married moms, I hope you will reach out to the single mother such as Sally and help her cope with the child-rearing task. Baby-sit for her so she can get out every now and then. Share your financial resources with those who have less, and include them in your holiday activities. You might be able to keep a single mom from going over the edge by giving her just a little encouragement and assistance. The Lord will reward you, I believe, for caring for someone who is desperate for a friend.

With that, we will close our discussion of single parents and grandparents with two more simple thoughts. The first concerns the difficult task of letting go when the job is done. That can be a very emotional time, especially for a mom who has labored, sweated, prayed, cried, scrimped, saved, cooked, cleaned, taught, and shepherded her children through numerous crises without the help of a husband or a father for her kids. All of a sudden, at the other end of childhood, the reason for her existence and her passion in living has to be surrendered. Her children have grown up. The empty place inside as her sons and daughters leave home can be like a chasm. After all these years, she is alone again.

My office at Focus on the Family sits across the valley from the United States Air Force Academy. From there I can see the cadets as they train to be pilots and officers. I particularly enjoy watching the gliders soaring through the heavens. The only way those graceful yellow crafts can fly is to be tethered to a powered plane that takes them up to where they can catch a wind current. Then they disengage and sail free and alone until returning to land.

While watching that beautiful spectacle one day, I recognized an analogy between flying and child rearing as a single parent. There is a time when your children need to be towed by the "mother plane." If that assistance were not available, or if it were not accepted, the "glider" would never get off the ground. But, inevitably, there comes an appropriate moment for a young pilot to disengage and soar free and alone in the blue heavens. Both operations are necessary for successful flight. If you as a parent are not there for your kids when they are young, they are likely to remain "grounded" for life. On the other hand, if they stay tethered to you as young adults, they will never experience the thrill of independent flight. Letting go not only gives freedom to your grown son or daughter but allows you to soar as well. It's all part of the divine plan.

I will close this discussion of single parents and grandparents by sharing an inspirational thought from an old black-and-white movie. It starred Ginger Rogers and Robert Ryan and was titled Tender Comrade. It was set in 1943, when most husbands and fathers had gone off to war. Rogers was one of the many women who were raising a baby alone. One day, she received the dreaded telegram from the War Department that began, "We regret to inform you ..." Her husband had been killed in action. Ginger immediately ran up the stairs to the nursery room, where her baby boy lay in his crib. She cradled him in her arms, and after a few quiet moments together, she tearfully spoke these touching words to the infant:

Wake up, Chris. I am sorry to have to wake you up like this but I've got to talk to somebody. I can't talk to them downstairs because they're having a wedding down there. You're the only one I can tell it to. I guess this is just a private thing between you and me anyway. I suppose years from now I'll still be telling you about how I stood there beside the train. (Her voice trails off and a voice-over of a conversation she had with her husband at the train station is heard in the background.)

Little guy (showing Dad's picture to the infant), this is yourfather. Chris, this is your son. You two aren't ever going to meet. Only through me will you ever know anything about each other. So now I am making my introductions. This is the kid you never wanted till you met me, Chris. This is your dad, young fella. I knew him when he wasn't much bigger than you. Oh, maybe a little bigger. You've got his eyes and that mop of hair, you know that one hair on your head that never stays in place. It's your dad coming out all right. Seems funny to call him your dad, he was such a baby himself. (Her voice trails off; avoice-over of a childhood memory she had with the father is heard in the background.)

Just by having been brought up with him, I know everything that's going to happen to you. When you're seven, some girl is going to hit you over the head with a klinker; and when you're ten, you're going to cut her hair; and when you're fifteen, you're going to take her to her first dance and break her heart. You see, little guy, I know the ropes. (Her voice trails off, voice-over of the father telling about all the wonderful plans he has forhis son.)

Remember him, Son. Remember your father as long as you live. He was a fine man, Chris boy. He never made speeches, but he went out and died so that you could have a better break when you grew up than he ever had. Not the same break but a better one. Because he did a lot of thinking about you in his own way. Never forget it, little guy. Never forget it. He didn't leave you any money. He didn't have time, Chris boy. No million dollars or country clubs or long, shiny cars for you, little guy. He only left you the best world a boy can ever grow up in. He bought it for you with his life. That's your heritage. A personal gift from your dad. (Her voice trails off; voice-over of the father talking about what the war is about is heard in the background.)

And one more thing: As long as you live, don't let anybody ever say he died for nothing because if you let them say it, you let them call your dad a fool. You let them say he died without knowing what it was all about. He died for a good thing, little guy, and if you ever betray it, if you ever let it slip away from you, if you ever let anyone talk you out of it, or swindle you out of it, or fight you out of it, you might as well be dead too. So hang on to it, sweet, latch on to it with those tiny little fingers; grab on to it, Chris boy, grab it right out of your dad's hands and hold it high, hold it proud.